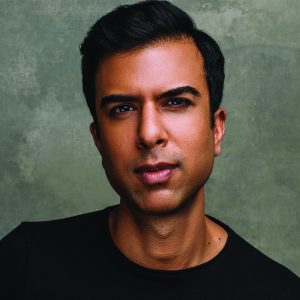 Join Soman at Scup for a live in-person event and signing, Sunday, November 3 at 2:00PM! The movie adaptation of his The School for Good and Evil series releases on Netflix on October 19…don’t miss your chance to meet the author and read the bestselling series that started it all!

SOMAN CHAINANI’s debut series, THE SCHOOL FOR GOOD & EVIL, has sold more than 3 million copies, been translated into 30 languages across six continents, and will be a major motion picture from Netflix in 2022, starring Charlize Theron, Kerry Washington, Laurence Fishburne, and Michelle Yeoh.

A graduate of Harvard University and Columbia University’s MFA Film Program, Soman has been nominated for the Waterstone Prize for Children’s Literature, been named to the Out100, and also received the $100,000 Shasha Grant and the Sun Valley Writer’s Fellowship, both for debut writers.

His latest novel, RISE OF THE SCHOOL FOR GOOD & EVIL, kickstarts a new series under his EverNever World brand.  Follow Soman on Instagram @somanc