Topic:  Racial Justice and Defunding Police: What It Is (and Isn’t)
Discussion: The Minneapolis City Council recently announced its intention to defund and dismantle the police department. Other cities have announced plans to defund police. What does it mean to defund police? What are the potential benefits and drawbacks? How might defunding police fit into the goals of broader racial justice reform across the US? We will discuss the potential benefits and drawbacks of defunding police, as well as why racial justice is a necessary precursor to any type of criminal justice reform. Lastly, we will set out a blueprint for what people of all backgrounds can do to raise consciousness and support anti-racism efforts.
Special Guest: Dr Robert A. Brown, Chair in the Department of Criminal Justice at North Carolina Central University + co-author Michael Braxton

Get your copy of Tessie’s Crimson Letters: Voices from Death Row at Scuppernong Books. 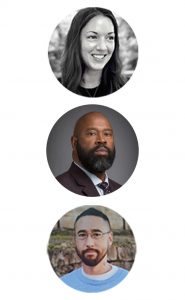 ROBERT A. BROWN is an Associate Professor and Chair of the Department of Criminal Justice at North Carolina Central University. Prior to earning his doctorate, he worked as a sentencing mitigation specialist for the National Center on Institutions and Alternatives (NCIA) coordinating offender-specific rehabilitation and supervision plans for offenders at the state and federal levels. Dr. Brown’s research focuses on street-level interactions between police officers and citizens (e.g., citation, arrest, use of force), the influence of race and gender (of officials and offenders) on criminal justice processing, and the impact of intermediate sanctions and problem-solving courts on rehabilitation and criminal justice processing.

GEORGE WILKERSON is an award-winning writer, artist, and poet currently incarcerated on North Carolina’s Death Row. In 2018 he was a PEN award for his essay LimpGreyFur, was a finalist for the Cathy Smith Bowers chapbook contest, and won a Gold Award in the “Capitalizing on Justice” Art Competition. In addition to being the editor for Compassion, a newsletter for people on Death Row, his work has appeared on multiple philanthropic platforms and exhibitions, including Hidden Voices, The Upper Room, The Marshall Project, Windows on Death Row, the Correction Accountability Project, and LifeLines Collective. In 2019 he was a finalist for an Ellie Award